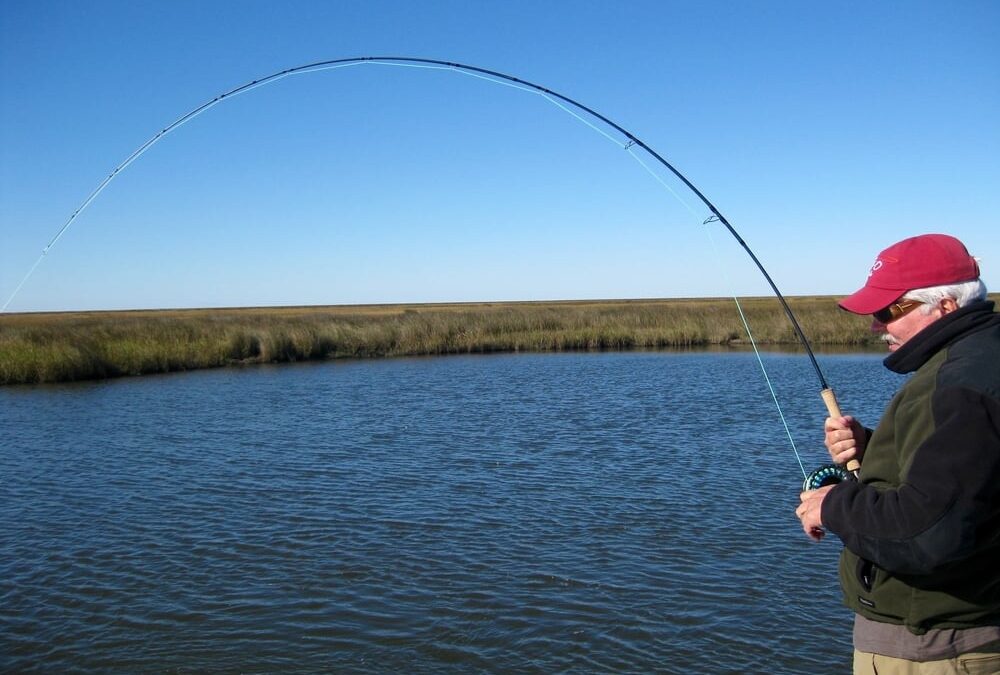 So you’re lucky enough to be on the casting platform of a poling skiff; your heart beats faster as you make a minimal amount of false casts and let one go, putting your fly directly in the path of a fat pumpkin.  You strip, strip… the redfish sees it, turns to follow it.  Strip, strip.  The fish keeps up with the fly… strip, faster strip…getting closer to the boat, heart beating faster… strip, strip, strip and the redfish turns away!  The sinking feeling in your stomach gives rise to a couple of choice expletives.

One of the most overlooked pieces of the saltwater fly fishing, sight casting puzzle is learning how to fish the fly.  It is that all too brief moment when you’ve presented the fly and then have to simultaneously watch the fish’s behavior and strip accordingly.  As with all things fly fishing, there are no hard and fast rules, but there are definitely a few things to keep in mind that will help you get that redfish to commit when they are being fussy.

Many of us fly fishers get into a bad habit of being boring strippers;  doing it at the same speed, with the same distance and little variation.  As with fly casting, individual physicality and style lead to a surfeit of possibilities, so let’s simplify and think of three speeds, three distances and variation.

Speed is easy:  fast, medium and slow.  A fast retrieve would be just as fast as you can move that line for the distance you are pulling it: for a short distance strip, almost two a second, for medium distance strips it may take just under a second, and for long distance strips a second. The fish are not thinking in milliseconds so neither should you.  At a medium speed, I like to say a slow “one Mississippi”, and at a slow speed, you could say a slow “supercalifragilisticexpealidocious”.  That’s 14 syllables. Pretty slow.

As for the distance traveled, remember that the fly will move over a greater distance in the water than what your hand pulls.  The fly does not stop exactly when your hand does; momentum propels it further.  For short strips try to move your hand from just the wrist, for medium length strips involve your arm with the hand, and for long distance strips, think of it more like the front haul on a long distance cast. (If you don’t double haul yet, just pull the line behind you for a long strip.)

With three speeds and three distances, the important thing to remember is to mix it up.  Varying the rhythm of the retrieve can be essential to eliciting a strike.  Try two short strips, followed by a medium length.  Try a long, slow strip followed by two short, fast strips.  Especially when blind casting(which is a hoot for specks) experimenting with your strip action is a must;  just don’t wait too long between strips because a fish could grab it and let it go if the time between strips is too long.  And if you can strip in morse code, try “fly fishing is awesome”.  You are sure to catch a big ‘un!

One final stripping technique to add to the arsenal is the double hand retrieve.  This involves putting your rod under your arm after the cast, cork handle held tight to your torso with the reel behind your tricep.  Experiment with which side feels better for you- fly casters generally use their casting arm, but the opposite side is fine, too.  Now you can use both hands to retrieve the fly.  This method allows for the fastest retrieve and also rests your casting hand.  It is especially effective for faster offshore fish like tuna, dorado, amberjack, and also our lake and marsh summertime jack crevalle.  It takes a bit of getting used to but is fun to do.  It is also a great way to be sure of a good strip-set as it precludes the possibility a habitual rod lift trout-set if you haven’t done much saltwater fly fishing.

What Fly Is That?

Consider what your fly imitates: baitfish, shrimp, or crab.  Baitfish move in a specific way when they are near big predatory fish—fast!  Baitfish patterns, from clousers to EP style flies, are best fished with faster strips.  As for the distance of the strip, mullet generally make longer bursts of speed than pogies but it is dependent on size; pay attention to the relative size of the bait nearby.  Nothing brings out the predatory instinct in a creature more than seeing its prey trying to escape.  Get that baitfish pattern moving.

Shrimp do not swim as fast as baitfish.  They do move pretty quickly in short bursts when they use their tail flipper and long abdominal muscle but move rather slowly when using their swimmerets, or five pairs of short swimming legs.  I’ve taken sheepshead on smaller shrimp patterns that were fished very slowly, and they couldn’t resist.  Imagine the way a shrimp moves—be the shrimp!

If you’ve spent any time out in the marsh you’ve seen small and medium-size blue crabs swimming around near the surface moving into new areas with the tides.  They can’t swim fast and make easy pickings for fish, but I think most crabs are taken at or near the bottom.  Red drum, and even more so, black drum, are designed to feed on the bottom.  In our opening example, the redfish refused that crab pattern because it didn’t act like a crab.  The last thing a crab does for self-preservation is to drop into the mud and try to bury itself in backward.  If you have a follow on a crab pattern, stop after a few enticing strips and wait for the redfish to pick it up.  If it is hovering over the fly and not taking, give the fly a little twitch and wait for the red’s gill plates to flare out in the big swallow.  Even in murky water, I’m always surprised how easily you can see that big, white mouth open wide.  That’s the stuff!

Of course, there are flies like the toad or spoon fly that one could classify as attractor patterns that don’t specifically mimic a baitfish, shrimp or crab.  Every fly demands a slightly different approach, as does different structure that you fish over, i.e grass, mud, oysters or sand.  Different depth water requires different flies and/or leader combinations to get your fly near the level of the fish.

One reason I love sight-fishing for redfish is that they are not always predictable.  Conditions and their behavior change frequently.  Some days they are super aggressive and as long as you put the fly in their field of vision, it doesn’t matter what it is or how you fish it, that red will crush it.  Other days they can be incredibly spooky and finicky feeders that seem to refuse everything in your fly box.  As in hunting, watching your quarry will give you invaluable signals as to how to proceed.  Being more thoughtful about your fly choice and your retrieve will definitely help on the tough days.

I’ll never forget the first red I caught from a kayak in Reggio, which had a spoon fly in its face three times before it lazily turned a little and just barely opened its mouth to take.  The fat, top end of the slot, copper colored red took a minute to even realize it was hooked, but once it did I had a blast as it dragged me and my KC kayak around awhile before it came to hand. Sometimes the most important thing is just to get your fly in the fish’s face.  You can’t catch them if you don’t.